"There are no forks in Fight Club." -

Do people still repair TVs? and is it worth doing? I came home today to find my Samsung HDTV had bit the dust, despite being well taken care of, plugged into a UPS and all of that..

In any case, the TV is out of warranty, but it wasn't a really cheap TV when I brought it in 2002, ao I'm disinclined to replace it. It's a 27 in. flat CRT HDTV with two component inputs and a slew of regular composite inputs on the back, and I'm using all of them, so I imagine it won't be cheap to replace if I were to buy new.

Worth getting repaired? How much can I expect to spend?

Keep in mind that me looking at it myself is completely out of the question.. I deal in software, folks. Design an enterprise identity management system? Configure some servers? No problem.. but, my legally-blind self isn’t about to start poking around inside a TV with all of its capacitors and what not.. :)

I just got a third-party utility to allow my Treo 600 to play MP3 ringtones, just so I could put TMBG's "Call connected through the NSA" ringtone on there...

This was the first

drewuniversity graduation I haven't attended since I myself graduated in 2002. I really wanted to go and wish people the best of luck, but I found myself to be sick as a dog when I woke up this morning (strangely, I was fine when I went to bed last night..)

For future reference, I'd hesitate to recommend the following combinations of foodstuffs in succession as standard Friday night fare:

although I'm not sure if that's what it really was.. and I did have a great time celebrating 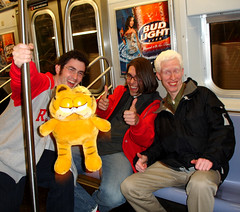 runstaverun and I with Garfield by this dude on the L train last night. 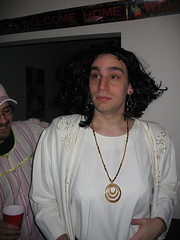 IMG_0794.JPG
Originally uploaded by Axel Larsson.
Realizing I hadn't posted a link to the photos from Frank and John's 25th birthday party last week. Here they are!. Also, take a look at the pictures that

So.. I suppose when it has now been over a week and a half since I was in Iceland and I have failed to make even one blog entry about it, I should probably just consider this LJ dead...

That would be a waste of a permanent account though...

Perhaps I should just give myself a kick in the ass and start posting in this thing again...

Things to think about...